Is Email Still a Viable Marketing Channel?
By: EZ Texting

In the time it takes you to read this single sentence, over 11 million emails will be sent. That's 281 billion emails per day worldwide, according to a report by CampaignMonitor.

How many of those are marketing emails? As it turns out, we marketers are the ones pushing the numbers. Return Path recently found that Gmail classified two out of every three emails as Promotions (68.4%).

No wonder it's so hard to get to Inbox 0.

So, if you were wondering, we're still sending a boatload of marketing emails—over seven million per second.

And the momentum isn't expected to slow anytime soon. According to the CampaignMonitor study, business email sends have been on a growth rate of 3% per year, and that trend is projected to continue.

The question is, does it still work?

The answers to these questions depend on who you ask. As you can see from the 2018 post titles below, you'll get a mix of answers. 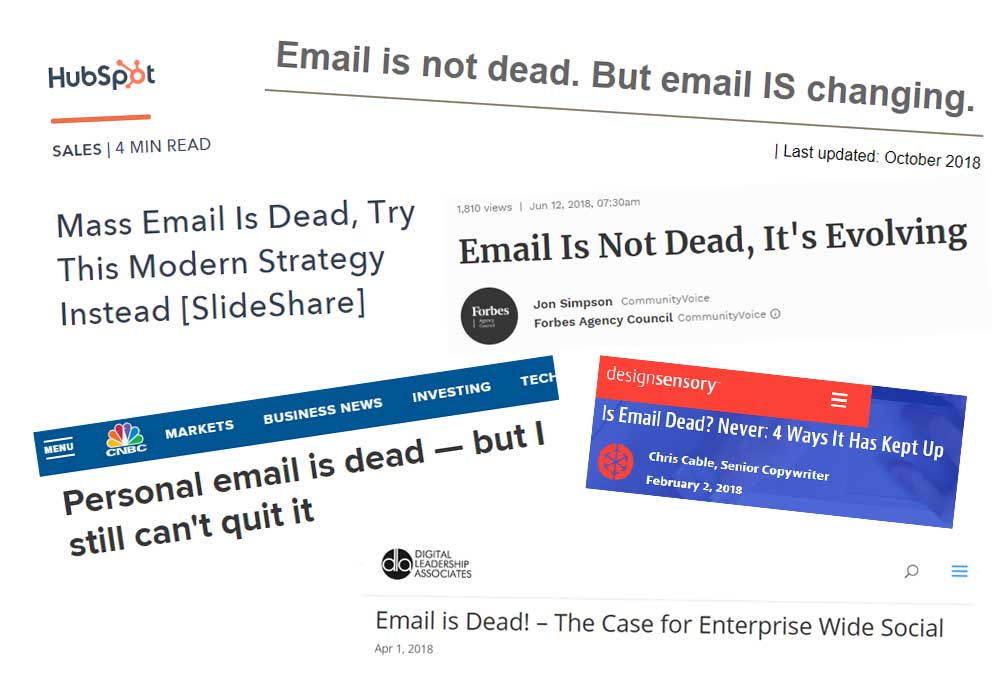 Here's a sampling of quotes pulled from those posts.

Myth: People hate being marketed to via email. In all actuality, research supports that people read most of their emails and do not mind frequent emails as long as they are relevant, interesting and specific to their needs.

It's annoying to even open my personal inbox now.

I email nobody, even my 80-year-old parents now use Facebook Messenger.

Email is not going to disappear. Possibly ever. Until the robots kill us all.

We tend to use social as a way to communicate, rather than email.

Are you convinced yet? Probably not.

There is no consensus on this topic. And, even if there were, we probably wouldn't tell you to jump on the bandwagon, no matter which way it's moving.

One of the more compelling data sets on the debate comes from the level of interest in email marketing indicated by search volume on Google. The graph below shows the change in query volume for "email marketing" over the last 15-ish years.

Does anyone else want to go to the beach? Those blue waves are looking good.

You see in that chart that interest in email marketing trended down through 2006, peaked in 2009, dipped again over the next five years, and hit another peak in the fall of 2017. There's an ebb and flow.

We're now in a bit of a downtrend—but, let's face it, marketers sometimes blindly follow trends, which come and go.

And, marketing channels get flooded with lots of noise when marketers jump on bandwagons. All of those factors can contribute to the return you get from tactics and channels which have performed well in the past. You may need to adjust.

Smart marketers don't just do what everyone else is doing. They stick to what they know works, while experimenting to find new things that deliver results without abandoning their bread and butter.

What the Data Says About Email Marketing Heading Into 2019

Now let's look beyond the broader trends to see if email is delivering actual value to marketers as we turn the corner into 2019.

MailChimp, a leader in the small business email marketing space, produced benchmark studies in December 2010 and March 2018, which we can use for a comparison.

These studies reveal that while email opens have increased over that eight-year span, click-through-rate (CTR) has decreased. The average open rate in 2010 was 19.08% and it moved up to 21.23% this year for an increase of 11.3%. CTR, conversely, fell from 3.54% to 2.46% for a decrease of 30.5%. The decrease in CTR was roughly three times greater than the increase in Open Rate. 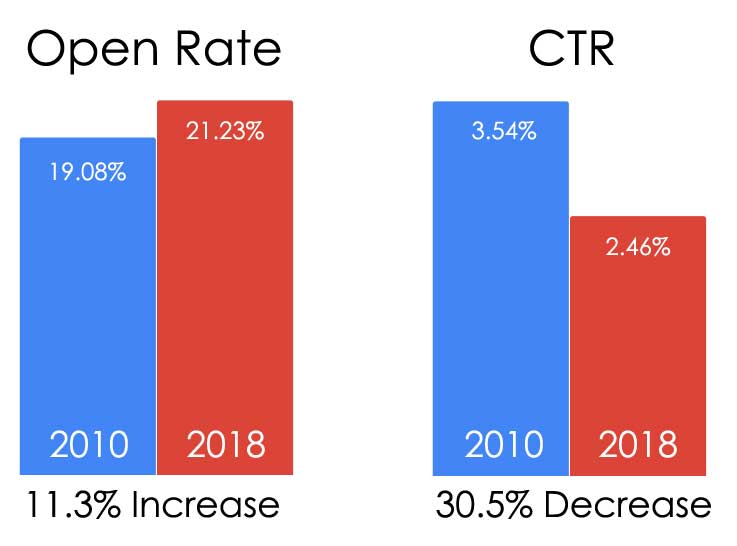 So more people are opening, but fewer are taking action. It could be argued that branding value from email has lifted in the last eight years, as indicated by the increased open rate. More people seem to be reading those messages. But most of us are measured on conversions, not branding. So CTR is the more important number of the two.

From a conversions standpoint, email marketing is 30% less effective than it was in 2010.

Now let's look at the drop in CTR in a little more detail. Out of the 36 industries measured by both studies, only six saw an increase in CTR. 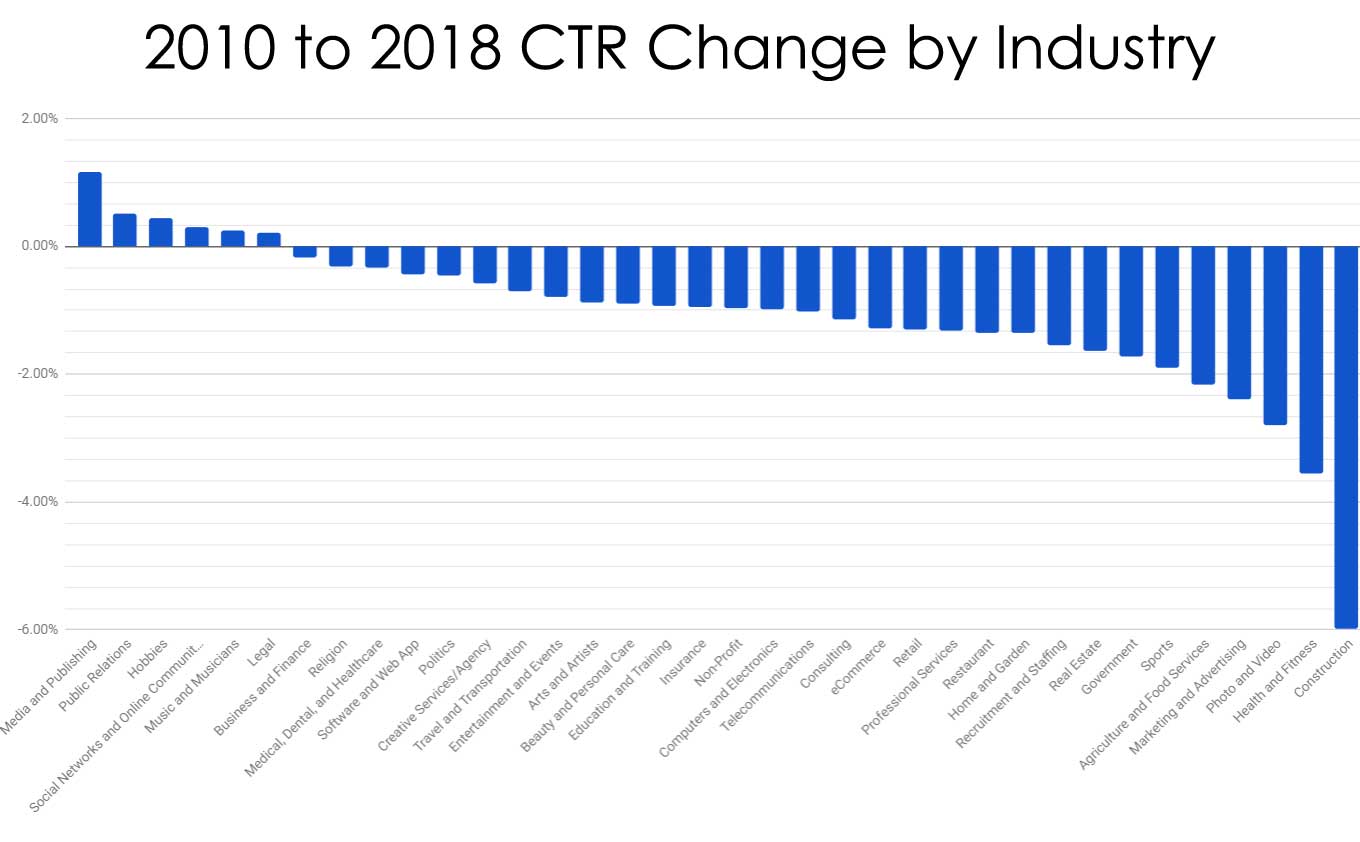 Looks terrible, right? Not necessarily. Keep in mind that, even with a 30% drop since 2010, email still yields a much higher CTR than most other paid marketing channels.

So, yes, email marketing still works better than almost all of the other paid marketing channels at your disposal.  But it isn't as powerful as it used to be.

So, what's the deal? Are people just not converting online like they used to? That's definitely not the case. Online sales have more than doubled in the same date range as the MailChimp studies.

The answer must be that people aren't using email to get what they want as much as they used to. They're using other channels. What's happening with email marketing is that its uses are becoming more specialized.

Email used to do a lot of the heavy lifting for a wide range of objectives. But over the last few years, more people are using other tools like Facebook Messenger for private personal connections, Slack for inter-office communications, web bots to complete transactions, and text messaging for instant interaction with both individuals and companies.

This specialization has given email users the incentive to restrict the number of times they check email. They don't have to look at it constantly because they aren't using it to do as much.

In 2014, the average person checked email 15 times per day. Experts who conducted a survey found that the number of times a person checks email affects their happiness level.

The participants filled out a daily 10-minute questionnaire related to their stress levels, and as a result, less frequent email checks made people much happier throughout the day.

With this in mind, analysts advised checking email only three times per day to keep stress down.

Similarly, in 2018, Emma Russell, head of well-being at Work Research Group at Kingston Business School in London, published research indicating that you should only check email every 45 minutes.

So, at the advice of productivity and mental health experts, more people are opting to check the inbox at longer intervals, rather than keeping a constant eye on it.

A Call to Diversification

Email isn't dying, and won't be for the foreseeable future. But it is changing. So, as a savvy marketer, you should look for ways to diversify your engagement with prospects and customers.

One of the ways companies are seeing success with diversification is by incorporating text message marketing. While people are checking email less often than they used to, they're engaging by text message more.

Studies show that 90% of text messages are read within the first three minutes. And, as we mentioned above, one analysis found that the conversion rate for text messages was 32%. Compare that with the email open rate of 21% and CTR of 2.46%, and you'll see why many marketers are using text marketing to get people to take action immediately.

Text messaging is one of the most effective ways to regain some of that engagement that email has dropped along the way.

Text and email marketing are similar in a lot of ways, so there isn't much, if any, learning curve for those new to mass text messaging. You'll send targeted campaigns to segmented groups of opted-in contacts who want to hear from you. But you don't have to worry about mobile formatting or A/B testing subject lines to determine how to get the best open rates. Our internal analysis shows that recipients read 98% of the messages sent from our platform.

If you're interested in seeing how text marketing can supplement your email campaigns in 2019, a great place to start is by reading our free Text Marketing Guide. In this resource, you'll learn how to use text marketing to engage with your audience in the easiest and most effective way possible.

We cover how to:

After what can politely be called a 'challenging" year for many small businesses, hope is on the horizon as we enter 2021. “As Americans look for...
Read more

How Text Can Help Your Small Business Thrive in 2021

For a small business the best New Year’s Resolution is to give a boost to your bottom line. Whether you need to improve revenue streams, streamline...
Read more