A Brief History of Narrowcasting

A Brief History of Narrowcasting
By: EZ Texting 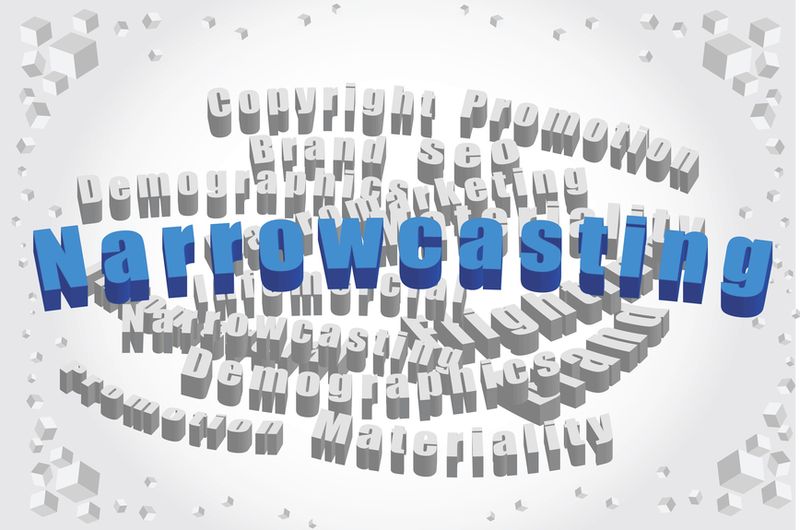 Slivercasting. Target marketing. Niche advertising. Whatever you call it, the history of narrowcasting goes back half a century, when the term referred to a future first imagined by public broadcasting proponent and ‘computing’s Johnny Appleseed’ J.C.R. Licklider during the golden age of network television in the mid-60s: “A multiplicity of television networks aimed at serving the needs of smaller, specialized audiences.”

Licklider coined the term ‘narrowcasting’ to describe the dissemination of information to a niche audience based on demographic, personal preference or subscription. Licklider’s grand vision was the ‘rejection or dissolution of the constraints imposed by commitment to a monolithic mass-appeal, broadcast approach.’ That must have sounded crazy in 1967, but Licklider's prophecy has come true - and then some. Narrowcasting has become the default marketing strategy of even the biggest corporations. The notion of the 'mass audience' has been discarded as the canard it always was, replaced with opt-in SMS blasts, cable TV spots and targeted online ads. But how did we get here?

In the early days of American television, the attentions of consumers were monopolized by the three major networks: NBC, CBS, and ABC. Each sought to obtain the widest audience possible, avoiding potentially controversial programming and sticking to the biggest=best formula. With so little competition, each network could have their turn at scoring a 90% audience share. The arrival of cable television heralded the end of the mass-marketing era, and narrowcasting, in which programmers and producers assume niche appeal as their best hope, was the new strategy. Music fans had MTV, news addicts CNN. As the 80s became the 90s, a Russian doll effect took hold, with MTV spawning increasingly targeted spin-off channels to satisfy increasingly niche fan bases. Fast forward to 2013, and the mother channel rarely trades in the 'music' of her name anymore. That's how successful the MTV diaspora is.

This was the consumer climate into which the internet was born. A fragmented marketplace served by a bewildering array of tech start ups, each offering something slightly different. Throughout the history of narrowcasting, it had never had a more natural home than the web.

A generation of marketing experts have been unshackled from the need to reach large audiences. They can tailor information to more selective audiences and make their content all the more compelling. This attitudinal shift has had a positive impact on SMS marketing. According to Mogreet, 88% of emails go unopened, compared to just 2% of SMS texts. Users are also more likely to engage with texts: the average person reportedly looks at their phone 150 times a day, while over half the population check their emails less than five times a day. SMS marketing stacks up just as well against Facebook which, as of 2012, stopped showing business owners' fan pages to 85% of their fans unless money changed hands. That change in policy meant even fans who had 'opted in' to receiving information about a business via the 'like' button no longer saw messages on their newsfeed. Not everyone has cottoned on to this important shift, and business continue to pursue fruitless social media campaigns that put Facebook centre-stage.

Even less useful than Facebook is Twitter, with 99% of commercial marketing tweets considered worthless spam by more people. Tweeting non-targeted lists of potential customers is a waste of resources; the message is simply tuned out like a late-night commercial break being unceremoniously muted by the viewer.

So what is it about texting that works so well for narrowcasting campaigns? Most people are compulsive about opening texts, partly because marketing companies were so slow on the uptake to use the medium that it still carries a more personal connotation. SMS messages look the same whether they're from a friend or a business. As industries have cottoned on to using SMS marketing, they have been careful to ensure 'opt-in' policies that appeal to consumers. This approach has left online-only marketing campaigns in the dust.

A professional, consistent SMS campaign that targets niche audiences – and niche audiences only – is proving to be the most effective method in the history of narrowcasting since the man known affectionately as “Lick” first coined the term.

After what can politely be called a 'challenging" year for many small businesses, hope is on the horizon as we enter 2021. “As Americans look for...
Read more

How Text Can Help Your Small Business Thrive in 2021

For a small business the best New Year’s Resolution is to give a boost to your bottom line. Whether you need to improve revenue streams, streamline...
Read more